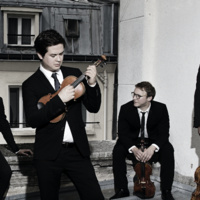 People currently holding tickets to this concert will have their tickets automatically transferred to the new date. If they can't attend they are eligible for a full refund through the Hult Center Box Office (541) 682-5000.

For people wanting to purchase tickets tickets are available now for the April 19 concert.

We are extremely sorry for any inconvenience this may cause people.

Since their formation in 2012, the ensemble is already an established presence in major international venues, performing at the Wigmore Hall in London, Auditorium du Louvre and Salle Gaveau in Paris, Tonhalle in Zurich, Musikverein in Vienna, Berliner Philharmonie, Tivoli Concert Series in Denmark, Sage Gateshead, and at festivals in Cheltenham, Heidelberg, Lockenhaus, Davos, Verbier, Aix-en-Provence, Montpellier/Radio France, Evian, Auvers-sur-Oise, Stavanger (Norway), Concentus Moraviae (Czech Republic), Haydn/Esterházy in Fertod (Hungary), Eilat (Israel) and Canberra (Australia). This season saw the quartet make their debut in Hong Kong, Australia & Taiwan. They are also due to return to North America this autumn for appearances at The Frick Collection in New York, The Phillips Collection in Washington DC, and Salle Bourgie in Montreal.

The Quartet records exclusively for Alpha Classics. Their debut recording, Mozart, was released to outstanding critical acclaim in Autumn 2016, and is followed by a disc of French music in late 2017.

The Van Kuijk Quartet is in residence at Proquartet, Paris, where they study with members of the Alban Berg, Artemis and Hagen quartets. Having taken their first steps as students of the Ysaye Quartet, the young musicians have worked with Günter Pichler at the Escuela Superior de Mùsica Reina Sofia in Madrid; supported generously by the International Institute of Chamber Music of Madrid.

The quartet also participates in international academies; at the McGill International String Quartet Academy in Montreal, with Michael Tree of the Guarneri Quartet and André Roy; at the Weikersheim International Chamber Music Course with the Vogler Quartet and Heime Müller, formerly of the Artemis Quartet, as well as the renowned academies in both Verbier and Aix-en-Provence.