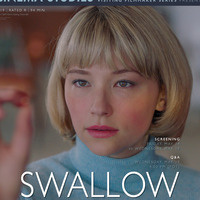 Students, faculty, staff, and the community are invited to a live, remote Q&A with Producer Mollye Asher who will discuss the film, Swallow, and share how a producer supports a director’s vision. Visit cinema.uoregon.edu for more information on how to join the Q&A.

Students, faculty, staff, and the community are also invited to a free virtual screening of Carlo Mirabella-Davis’ Swallow (2019), available for viewing from May 14 to 19. Produced by Mollye Asher, Swallow was an official selection at the 2019 Tribeca Film Festival and won Best Actress at the festival. The free screening of Swallow will be made available online through the Eventive streaming platform and requires advance registration. Registrations are limited to the first 150 viewers on a first-come, first-served basis. For more information and to register for the screening, please visit cinema.uoregon.edu.