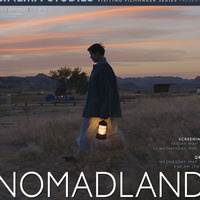 Students, faculty, staff and the community are invited to a live, remote Q&A with Producer Mollye Asher who will discuss the film, Nomadland, and share how a producer supports a director’s vision. Visit cinema.uoregon.edu for more information on how to join the Q&A.

Mollye Asher is a Gotham Award-winning producer and recipient of the 2020 Independent Spirit Producers Award. Most recently, she produced Chloé Zhao's Nomadland (2020), which won Best Director and Best Picture Drama at the 2021 Golden Globe Awards, the Golden Lion Award for Best Film at the 2020 Venice Film Festival, and many other honors. Nomadland is one of the most acclaimed films of 2020, with special attention given to the performance of Frances McDormand.

Students, faculty, staff, and the community are invited to a free virtual screening of Chloé Zhao's Nomadland (2020), available for viewing from May 21 to 26. Produced by Mollye Asher, Nomadland is one of the most acclaimed films of 2020, winning Best Director and Best Picture at the 2021 Academy Awards and Golden Globe Awards in addition to numerous other awards. For more information and to register for the screening, please visit cinema.uoregon.edu.

The free screening of Nomadland will be made available online through Searchlight Pictures' streaming platform, Debut, and requires advance registration by May 18 at 12:00 pm (PDT). Registrations are limited to the first 150 viewers on a first-come, first-served basis. After you RSVP, you will receive an email on May 21st from Searchlight Pictures' streaming platform, Debut, with viewing instructions on how to watch the film. The film will be accessible from 7:00 pm (PDT) on Friday, May 21, 2021 to 7:00 pm (PDT) on Wednesday, May 26, 2021 and you will have 72 hours to finish the film once you start watching it.  For more information and to register for the screening, please visit cinema.uoregon.edu.