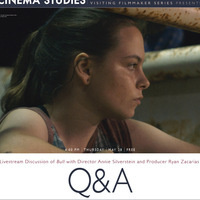 Livestream Q&A Visit cinema.uoregon.edu for a link to the Q&A

UO students, faculty, staff, and the community are invited to a livestream talk with Director Annie Silverstein and Producer Ryan Zacarias. They will discuss their latest film, Bull, and share how a producer supports a director’s vision. The event will include an interactive Q&A.

Los Angeles-based producer Ryan Zacarias has generated some of the boldest independent films in recent years. Balancing taste, logistical know-how, and productive working relationships, Zacarias has played a vital role in bringing the work of exciting filmmakers like Jonas Carpignano and Rick Alverson to the screen. Zacarias recently completed Annie Silverstein’s debut feature, Bull (2019), which premiered at the Cannes Film Festival, and executive produced Give Me Liberty (2019), which premiered at Sundance. His films have garnered many awards and critical acclaim, and he is a 2019 Independent Spirit Producer’s Award nominee.

Annie Silverstein is an award-winning filmmaker and media educator based in Austin, Texas. Her films have screened at international festivals including Cannes, SXSW, Silverdocs and on PBS Independent Lens. Before attending film school, Annie spent ten years as a youth worker and community media educator. She co-founded and served as Artistic Director at Longhouse Media, an indigenous arts organization based in Seattle. In 2014 she wrote/directed the short film, SKUNK, which won first prize at the 2014 Cannes Film Festival–Cinéfondation. Annie was named one of the “25 New Faces of Independent Film” by Filmmaker Magazine and was selected for the Sundance Screenwriters and Directors Labs for Bull, her feature debut. Bull premiered at the Cannes Film Festival in Un Certain Regard,and won the Grand Prize, Critics' Prize, and Revelation Prize for Best First Film awards at the Deauville American Film Festival. Annie is a lecturer at the University of Texas-Austin, where she earned her MFA in Film Production.

The UO Community is also invited to a free exclusive video on demand screening of Annie Silverstein's debut feature, Bull (2019). Advance registration is required for a viewing code. The viewing code may be activated for 72 hours from 12:01 a.m. Tuesday, May 26, 2020, through 11:59 p.m. Thursday, May 28, 2020, and is available on a first come, first-served basis to the first 300 viewers. Visit cinema.uoregon.edu for more information and to register.