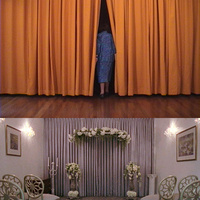 Center for Art Research, University of Oregon, Department of Art

Miriam Gossing & Lina Sieckmann’s 'Desert Miracles’ is a cinematic exploration of a commercialized architecture of desire. Across 22 different tableaus, the film meditates upon the interiors of Nevada’s wedding chapels considering how the excessive scenery opens up to constitute a cultural organisation of “Love”. A woman’s voice is heard reading out an ambiguous letter to an unknown lover, in which she finds herself troubled by the challenges of modern relationships, unable to negotiate a balance between self-fulfillment and optimization. The text is based on anonymous posts by different women in various internet wedding forums. One fictional female character is composed out of many assembled perspectives on desire, relationships and social expectation.

In Euan Macdonald’s video work “Healer”, the power of belief is in question: is psychic healing a kind of trickery or, can viewers allow themselves to believe that they are witnessing a magical moment; that this woman is capable of emitting psychic energy that has the power to heal? As Giorgio Verzotti notes, “Macdonald’s art seems to question the real meaning of things, beginning with the presupposition that their images are inherently deceptive, indeed that they are all connected within a single network of relationships based on illusions.”

Miriam Gossing & Lina Sieckmann have studied at the Academy of Media Arts Cologne under Matthias Müller, Phil Collins, Sophie Maintigneux and Beate Gütschow, as well as at the Kunstakademie Düsseldorf under Rita Mc Bride. As an artist duo they have made several experimental films on 16-mm film, in which urban and private architecture, hyper-staged environment, and the notion of desire are examined – combining documentary imagery with fiction and found footage.Their work is shown internationally in exhibitions and film festivals (e.g. Hamburger Bahnhof – Museum für Gegenwart Berlin, International Short Film Festival Oberhausen, Videonale, Kunstmuseum Bonn, Anthology Film Archives New York City). They have been awarded with numerous prizes and scholarships, amongst them the Wim-Wenders-Stipendium, the German Short Film Prize and the Nomination for the Preis der Nationalgalerie für Filmkunst.

Special thanks to the Department of German & Scandinavian and the German Studies Committee in conjunction with their international conference on Feminism/Theory/Film.