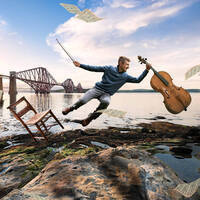 Bach and his Brandenburg Concertos have become synonymous with Baroque-era music. Among this collection of iconic works, the Fifth Brandenburg stands out for its use of solo harpsichord (Bach’s instrument of choice) and the incredible cadenza in the first movement. Brandenburg Six’s dual violas and inclusion of the antiquated gambas speaks to the caliber and variety of musicians Bach had at his disposal. The gamba part is believed to be written for Prince Leopold, who would join the court musicians when they played.