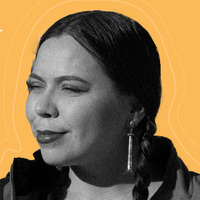 BE Rezilient with Tracie Jackson

Tracie Jackson studied design at UO and is an Indigenous designer focused on the intersectionality between culture, sport, and design. Tracie is focused on creating authentic representation for BIPOC in the sportswear industry.

Tracie Jackson is a Diné Indigenous artist and designer. Growing up on and off the Navajo Reservation in Northern Arizona she was raised by an artisan family full of weavers and silversmiths making her a fourth generation Diné artist. At age 14 she saw her future in the N7 logo she had seen at a Native basketball tournament. She had never seen Native representation in the sports world like it so she made it her goal to be N7's designer.

In 2018 she achieved her dream job of working for Nike N7. Starting out as a graphic designer for footwear and apparel she is now a Footwear Designer leading the N7 design team at Nike World Headquarters. In 2019 Tracie led the creative direction for the N7's Holiday Collection collaboration with Pendleton Woolen Mills. The collaboration featured footwear, clothing, and a custom designed Pendleton blanket with proceeds going back to the N7 Fund and the American Indian College Fund. On top of leading the creative side Tracie was also featured in the collections campaign highlighting Indigenous women who are 'Modern Matriarchs'. That same Fall Tracie and a few other Native women on the campaign were invited to lead a panel discussion at the Teen Vogue Summit explaining the meaning of being a 'Modern Matriarch'.

Outside of her Nike work Tracie creates handmade jewelry and art collections influenced by her perspective of Native arts meeting sport culture. In 2020 for the MTV VMAs Taboo from the music group Black Eyed Peas reached out to Tracie for custom made beadwork for his appearance and performance. Tracie created a beaded medallion Necklace made out of sterling silver, turquoise, and design motifs personal to Taboo and his Indigenous culture.

In 2021 she started her art shop called Rezilient Soles focused on the intersectionality between sportwear and Indigenous culture. The artwork ranging from overt Indigenous designs to Indigenous craftsmanship done with a sports twist. Representation matters and she's using art and design to create space for Indigenous peoples in sport.

BE Rezilient is organized by The BE Series

The BE Series (@uobeseries) brings together thinkers, makers, disrupters in every field to share their ideas on issues that really matter.