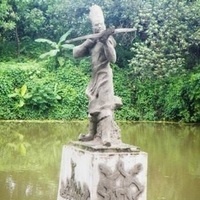 Join us for a lecture by Nam C. Kim, Professor of Anthropology at the University of Wisconsin-Madison entitled "Barbarians, Bronzes, and National Imagination: Exploring Legendary Co Loa" on Tuesday, January 18, 2022 at 12:00 PM in 260 Condon Hall.

Two thousand years ago, China's Han Empire stretched beyond the mountains far to the south of the Central Plains, reaching to its southernmost periphery, the Red River Valley (RRV) of present-day Vietnam. The Han claimed they had "civilized" the RRV's "barbarians." In contrast, many Vietnamese believe this time and location represent the birthplace ofan indigenous, proto-Vietnamese civilization that predates Han arrival. This view is based on colorful tales and legents. One of the most enduring accounts tells of the Au Lac Kingdom and its capital Co Loa. At the heart of ongoing intense and sometimes nationalistic debates are two contrasting views. One sees civilization as a byproduct of Han arrival, while the other sees it as the outcome of local indigenous cultural traditions. This lecture presents recent and ongoing archaeological research that addresses these themes and questions.