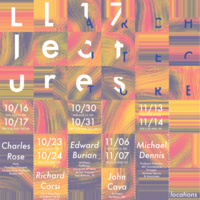 After graduating from Princeton University and Harvard University’s Graduate School of Design, Charles Rose established his Boston-based architectural practice with the intent to develop innovative yet contextually appropriate work. Early in his career, he worked with landscape architect Michael Van Valkenburgh, an experience that influenced his design philosophy of architecture that "sees the site." In over two decades, he has completed more than 50 buildings throughout the United States that have adhered to this credo. The work’s inventiveness, coupled with exceptional craftsmanship, has kept him at the forefront of American design. His award-winning buildings have been praised for their form, orientation to site, and carefully composed experiential sequences. Randy Gragg, formerly Editor in Chief at Portland Monthly, wrote of his Drawing, Painting, and Photography Building at the Oregon College of Art and Craft in Portland: “Every corner is a carefully composed and crafted convergence of forces that turns the artmaking inside into a collaboration with the surroundings.” Additionally, with increasing environmental concerns, clients are seeking the firm’s expertise in sustainability and zero net energy design and implementation—marking a new chapter of exploration.