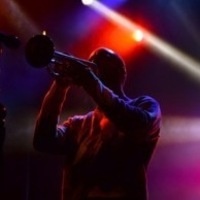 Now showing the glorious concert photography of Meerah Powell in the Aperture Gallery of the EMU. Meerah Powell was born and raised in Eugene, Oregon, and spent a lot of time around music growing up. Whether it was watching performances from the crowd, or playing in bands on the stage, music was what made Meerah feel most at home — and it was what introduced her to journalism. Meerah is a self-taught photographer and began writing about and photographing live music when she began studying at the University of Oregon, working with the Daily Emerald and later on, after graduating with the class of 2017, as a staff writer with Eugene Weekly. Having the chance to photograph and talk with some of her favorite artists throughout the years helped Meerah grow not only professionally, but personally. Although now she's heavily covering news, working as a general assignment and breaking news reporter for Oregon Public Broadcasting in Portland, she still spends a great amount of time around music as it will always serve as a great inspirational and creative space for her. The works of Meerah Powell will be on display in the Aperture Gallery from now until the end of Spring term.