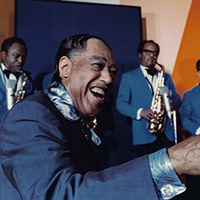 Programs for many spring events will be available on the SOMD website.

Part of the UO’s April 2014 celebration of Jazz Appreciation Month!

Eugene radio host and UO jazz historian and performer Carl Woideck assembles an all-star tribute concert featuring faculty and students in the UO’s Jazz Studies Program to celebrate the birthdate of music icon Duke Ellington. The concert will include numerous Ellington standards and favorites, performed by faculty members and students.

With more than 3000 songs composed during his lifetime—including favorites such as "It Don’t Mean a Thing if It Ain’t Got That Swing," "Sophisticated Lady," and "Mood Indigo," Edward Kennedy "Duke" Ellington is often cited as America’s most prolific composer, as well as one of its most beloved.

As both a composer and as a bandleader, Ellington’s influence on jazz and pop music continues to this day. During his storied career, Ellington was awarded the Pulitzer Prize and the Grammy Lifetime Achievement Award, along with 13 individual Grammy Awards.