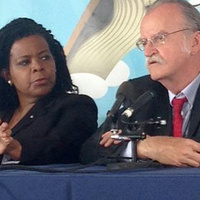 Annette Gordon-Reed and Peter Onuf: "Most Blessed of the Patriarchs: Thomas Jefferson and the Empire of the Imagination"