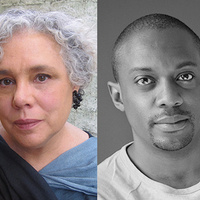 The event is free and open to the public and live on Zoom- register here. The lecture will also live stream on the Department of Art Facebook.

Alison Saar’s sculpture, prints and paintings address issues of race, gender and spirit. She studied art and art history at Scripps College and received an MFA from the Otis Art Institute. Her awards include a John Simon Guggenheim Memorial Foundation Fellowship, National Endowment Fellowships, and the United States Artists Fellowship. Saar has exhibited at many museums, including the Hirshhorn Museum and Sculpture Garden and the Whitney Museum of American Art, Her art is represented in the collections of the Hirshhorn Museum and Sculpture Garden, the Metropolitan Museum of Art and the Whitney Museum of American Art. She currently resides in Los Angeles and is represented by L A Louver Gallery.

Hank Willis Thomas is a conceptual artist working primarily with themes related to perspective identity, commodity, media, and popular culture. His work is included in numerous public collections including the Museum of Modern Art in New York; the Solomon R. Guggenheim Museum, New York; the Whitney Museum of American Art, New York; the Brooklyn Museum, New York; the High Museum of Art, Atlanta, and the National Gallery of Art, Washington D.C. His collaborative projects include Question Bridge: Black Males, In Search Of The Truth (The Truth Booth), and For Freedoms, the first artist-run initiative for art and civic engagement. In 2017, For Freedoms was awarded the ICP Infinity Award for New Media and Online Platform. Thomas is also a recipient of the Guggenheim Fellowship (2018), the AIMIA | AGO Photography Prize (2017), the Soros Equality Fellowship (2017), and is a member of the New York City Public Design Commission. Thomas’ first comprehensive survey Hank Willis Thomas: All Things Being Equal…opened in the fall of 2019 at the Portland Museum of Art in Portland, OR and traveled to Crystal Bridges Museum of Art in Bentonville, AR (February 8 – July 13, 2020) and ended at the Cincinnati Art Museum in Cincinnati, OH (September 4 – November 8, 2020).

Hamza Walker is the director of the Los Angeles nonprofit art space LAXART and an adjunct professor at the School of Art Institute of Chicago. Prior to joining LAXART in 2016, he was director of education and associate curator at the Renaissance Society, a non-collecting contemporary art museum in Chicago, for 22 years where he organized numerous shows and public programming and wrote extensively on the field of contemporary art. Notable shows at the Renaissance Society include “Suicide Narcissus” (2013), “Black Is, Black Ain’t” (2008) and “New Video, New Europe” (2004). In addition to his work at the Renaissance Society, Walker also co-curated the Made in L.A. 2016 biennial. He has won the Walter Hopps Award for Curatorial Achievement in 2014 and the prestigious Ordway Prize in 2010 for his significant impact on the field of contemporary art.

free and open to the public