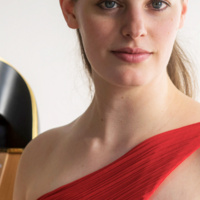 Abigail Kent is the 2017–19 touring “Concert Artist” of the American Harp Society after winning the prestigious Pan-American solo competition. Currently, she is presenting solo recitals and teaching masterclasses throughout the US and Canada, while also having been a featured harp soloist for the 2017 World Harp Congress in Hong Kong, a Laureate Finalist at the 2017 Classics Alive management search in Los Angeles, and named the February 2018 “New Artist of the Month” for Musical America International Magazine.

Her earlier awards include Finalist for 2016 International Harp Competition in Hungary, Winner of 2015 American Strings Teachers Association Senior Harp National Solo Competition, and Winner of “Play With Pros” Concerto Competition, performing with members of the Philadelphia Orchestra at the 2013 Saratoga Harp Colony.

As an orchestral harpist, she is Principal Harpist for “Symphony in C” and is Guest Musician Harpist for the Charleston Symphony Orchestra and the New World Symphony. Additionally, she has been Principal Harpist of the Spoleto Festival Orchestra as well as the Principal Harpist fellow of the Pacific Music Festival in Sapporo, Japan and has participated in orchestral festivals such as the Aspen Music Festival. She has performed internationally in venues such as Carnegie Hall, Lincoln Center, Jordan Hall in Boston, the Mozarteum in Salzburg, Southwark Cathedral in London, and Konzerthaus in Berlin and has performed under the batons of Valery Gergiev, Michael Tilson Thomas, Yannick Nézet-Séguin, Osmo Vänskä, Vladimir Jurowski, and Ken Lam.

An avid proponent of new music, she has premiered commissioned works and solos written for her including dahlianum by Andrew Hsu, The Star at Night by Ben Yee-Paulsen, and The Tolstoy Trio by Nicholas Bentz.

Ms. Kent studied for a year at the Royal Academy of Music in London, and then was selected as the Maryjane Mayhew Barton Fellow at The Curtis Institute of Music in Philadelphia where she graduated with the Landis Award for Excellence in Academics. Currently, she is a Presidential Scholar studying with Emmanuel Ceysson, Principal Harpist of the Metropolitan Opera Orchestra, in the Masters of Music program at Mannes School of Music in New York City.