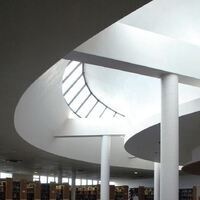 The year 2020 marked the 50th anniversary of the completion of Alvar Aalto’s Library at Mount Angel Abbey. After postponing this event due to the coronavirus,  we will be celebrating this milestone and honoring the beautiful and impactful ways that Aalto made daylighting an integral part of his designs. Please join us for the 2022 Reynolds Symposium: Aalto : Light, in Portland and at the library in Mt. Angel, Oregon, May 20-21, 2022.

The Finnish architect, Alvar Aalto, has been named “a master of light.” His architecture is among the most well-regarded of the mid-twentieth century for his innovative use of daylight, which was an integral part of his architectural language. While the majority of his built work is in Finland and northern Europe, two of his buildings are located in the United States; in Cambridge, Massachusetts, at MIT and in Oregon, at Mt. Angel Abbey. During his career, Aalto designed 10 libraries, and a number of reading spaces within other buildings, spanning from Viipuri Library, in Vyborg Russia in 1935 to Mt. Angel Library in1970. Arguably the Mt Angel Library is his best, and it is certainly most sophisticated in terms of its luminous design.

The Mt. Angel Library has recently undergone repairs of its skylight and is once again in pristine condition. In celebration of this anniversary and to celebrate the role that this magnificently daylighted building has played in the lives of architecture students and faculty at the University of Oregon, and beyond, the 4th John Reynolds Symposium will focus on Aalto and light in architecture.

The Symposium will launch on Friday with an evening keynote and reception in Portland at Nordic Northwest, and run the full day on Saturday at the Mount Angel Abbey Library, Mt Angel, Oregon.

Professor Pallasmaa is one of Finland’s foremost architects and architectural theorists. He has taught at numerous universities in Finland and in the US. He has authored two dozen books and over 300 essays in 30 languages. He has frequently written on and lectured about the work of Alvar Aalto.

Architect Tommi Lindh is the managing director of the Alvar Aalto Foundation. Prior to this he served as architect and keeper of antiquities at the Finnish National Board of Antiquities from 1998 to 2010. He has also had his own architectural practice.

Prof. Wiliam “Bill” Miller is a graduate of the University of Oregon. He had a forty-plus year career as an architect and educator at three institutions—the University of Arizona, Kansas State University, and the University of Utah. He is also an internationally published scholar on the architecture of Aalto and other Nordic architects. His most recent publication is Nordic Modernism: Scandinavian Architecture 1890-2017.

Barbara Erwine is an architectural consultant, educator, researcher and writer. Combining her early technical background as an analytical chemist with a mid-career switch to architecture, her design work celebrates the integration of passive design strategies with architectural place-making. Barbara's early focus on the use of natural light in buildings expanded to incorporate the wide range of sustainable design strategies as this fledgling field emerged in the early 1980's. She is the author of Creating Sensory Spaces: the Architecture of the Invisible.

Kent Duffy, FAIA, is an award-winning architect highly regarded for his innovations in sustainable design. He is a consulting principal at SRG Partnership in Portland Oregon. He received his BArch from University of Oregon. He was the project lead on the design of Annunciation Hall at Mt. Angel Abbey. He has collaborated with UO’s ESBL on a number of daylighted and passively conditioned buildings in the Northwest.

Dr. Brian Morin, is Library Director at Mt Angel Abbey Library. He will speak about his experiences with the building.

Abbot Jeremy is the 12th abbot of Mount Angel Abbey. He has taught theology at the seminary there and in Rome. He is the author of a number of books on theology. He has been a long time user of the library at Mount Angel, having been there during its construction.

This School of Architecture & Environment event is sponsored by Nordic Northwest, the College of Design"s Scandinavian Design Fund, and the Department of Architecture's Reynolds Symposium Fund.