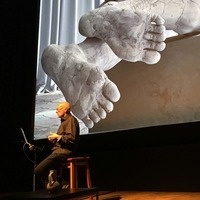 An Evening with Garth Clark

Over the course of An Evening with Garth Clark, this distinguished scholar, critic, and provocateur will deliver A Necessary Irritant, a roller coaster ride through the Ceramic Revolution. Drawing on over 80 books, 400 monographs, essays, and reviews he has authored over the past five decades, Clark’s presentation weaves together his biography with seminal moments in 20th and 21st century contemporary ceramic art. This is the first West Coast stop on an international tour that has taken Clark through the UK, Australia, US, and Canada. Clark's last talk in Portland on October 15, 2008, the provocative How Envy Killed the Crafts, went viral globally and was translated into more than 12 languages, produced a book, and was included in numerous anthologies.