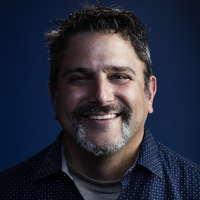 Julio Ricardo Varela’s many years covering issues and events directly impacting the Latino, Hispanic, and Latinx communities have positioned him as one of the leading voices addressing the migrant situation at the southern border of the United States.

In the last few years, we have seen the largest flows of migration at the U.S.-Mexico border since the mid-2000s, and the U.S. government is now tasked with tackling one of America’s most pressing issues that have no sign of slowing down or going away.

In this inspiring keynote, Julio Ricardo Varela will tackle the stories from the border that the mainstream media tends to ignore and will share the latest firsthand accounts of those battling one of the country's most misunderstood and misinformed issues.

$10 – Registration is required at https://sojc.link/COCC-Chandler  (One registration per viewing device. Live captioning available.)

As editorial director for Futuro Media, Julio (Julito) Ricardo Varela is responsible for the overall editorial vision and voice of Latino USA, Latino Rebels, and "In The Thick." As vice president of new business development for Futuro Studios, he also heads up the division’s new business initiatives, which have received industry accolades and have positioned Futuro for continued, sustainable success.

In 2011, Julio founded Latino Rebels, one of the top U.S. Latino digital media sites in the world. In 2018, LR officially joined the Futuro Media family. He also co-hosts "In The Thick" with Maria Hinojosa. He is a frequent contributor to Latino USA, and as Digital Director for Futuro from 2015–2020, Julio expanded the show’s digital footprint, overseeing historic gains in online and social audiences.

Previously, Julio was a digital producer for Al Jazeera America’s “The Stream,” and his work has been featured in many global outlets, including The New York Times, The Washington Post, The Atlantic, The Guardian, ESPN, NBC News, Quartz, Le Monde, WGBH, WNYC, Face the Nation, MSNBC, Fusion, Univision, and Telemundo. He has made numerous national TV appearances for Latino USA and Futuro Media.

In 2015, the National Association of Hispanic Journalists honored Julio with its inaugural DALE (pronounced like Pitbull would say it) Award, given to “an individual or company that steps up and goes above and beyond to ensure Latinos are fairly and accurately represented.”