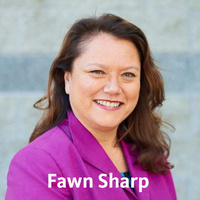 Dr. Clarita Lefthand-Begay, University of Washington. Dr. Lefthand-Begay is an Assistant Professor and Director of the Tribal Water Security Project at the Information School, University of Washington. Dr. Lefthand-Begay is a citizen of the Navajo Nation. Her interdisciplinary research focuses on the protection of indigenous knowledge in the United States, tribal water security, and climate health and resiliency. Indigenous knowledge systems are foundational to each of her projects. She is currently the Director of the Tribal Water Security Project, which examines the water insecurity challenges faced by tribes in the United States and around the globe. As a researcher and tribal community member, Clarita supports efforts to strengthen tribal wellbeing while respecting and honoring self-determination and cultural revitalization.

Fawn R. Sharp, President of the Quinault Indian Nation. President Sharp is an attorney with an academic background in criminal justice. She holds an advanced certificate in International Human Rights Law from Oxford University. President Sharp formerly served as Managing Attorney/Lead Counsel/and Associate Judge for the Quinault Indian Nation government. She also served as an Administrative Law Judge for the Washington State Department of Revenue Tax Appeals Division. While president of the Quinault Indian Nation, Sharp was elected as President of the Affiliated Tribes of Northwest Indians (ATNI 2001-2017); Vice President for the National Congress of American Indians (NCAI), an organization established in 1944 representing 566 Tribal Nations (2016-2017); We Are Still In Leader Circle (WASI) member (2018-present). She completed two years of service as Chairman of the United States Department of the Interior Secretarial Commission on Indian Trust Administration and Reform that issued its final report in December 2013.