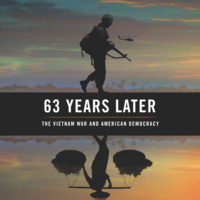 What does it mean to live in a democracy? What are the consequences of war? Who participates? Where are these conversations being had? ’63 years later’ is an exploration into how the Vietnam War affects our community today. It questions the notions of participation and identity, transporting audiences back to a time when a national divide drove many apart. Oregon had a large population of men and women who served in Vietnam. But it also saw some of the most prominent anti-war protest movements and has one of the largest Vietnamese-American populations in the country. How does Oregon’s story relate to Vietnam? What are some connecting points? What can we learn?

The event will feature a screener from the Ken Burns documentary as well as the ’63 years later’ project from The Northwest Stories’ digital production team. Following the screeners, there will be a panel discussion moderated by Steven Beda, a historian and professor at the University of Oregon. The panel will feature Jim Schmidt, Cathy Wood Wyrick, Jeff Dean and Tina Semko. The panelists' bios are listed below.

Jim Schmidt is a professional photographer, now retired. He was drafted into the Army in 1970 at age 20.  He served with the 101st Airborne, 2nd Brigade, in the Hue/Phu Bai area as an infantry rifleman.  He speaks to high school and university students, volunteers in the local free kitchen, and helps build Conestoga Huts, simple housing for the homeless. One of the camps is devoted to homeless veterans.

Tina Semko is the Executive Officer of Health Equity Partners, a consulting agency focused on Diversity, equity and inclusion with a health lens focus. She is also the Vice President of Operations at Right to Health, a portland nonprofit dedicated to achieving equal health access to immigrants, refugees and communities of color. Tina’s grandmother was a refugee of the Vietnam War who’s story is featured in ’63 years later’.

Jeff Dean was a photographer and videographer for ’63 years later’ and visited Vietnam with the Northwest Stories team in September 2017. He is also a veteran having served two tours in Iraq as a MEDEVAC crewchief following which he returned to school to pursue journalism.

Cathy Wood Wyrick is the director of Northwest Dyslexia Resources.  She was a graduate student at Portland State University in 1969-70 and an activist working to stop US involvement in Vietnam.  After serving as a reporter for The Oregonian, a founder of Willamette Week, and a researcher for Newsday, she switched to education, working with students with dyslexia and writing educational materials.