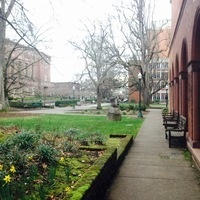 Let's talk about power and community. Let's talk about good and bad outcomes at the UO, using judgments that Jane Jacobs encouraged people to use throughout her career. In 1970 the University of Oregon began a radical experiment in campus community-driven planning, known later as The Oregon Experiment. The idea -- proposed by the author of A Pattern Language, Christopher Alexander -- was to improve the quality of the environment by involving the community -- the real experts -- in genuine decision-making. This could lead to beautiful buildings, but Alexander later understood that he had not left enough at the UO to achieve this. We'll briefly train you in the approach he would use today.

We will meet outside in the Amphitheater in front of the EMU on the corner of 13th Avenue and University Street. We will then wander around campus. We will start after the return of the 'Trees of the UO Campus' Jane Jacobs walk.