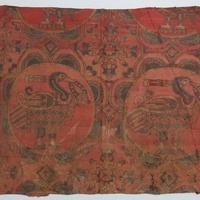 In the 6th century, the circulation of silk and embroidered textiles with zoomorphic motifs, often enclosed in pearl medallions, influenced Eurasian art. Although they have been often mistaken as “Sasanian,” these textiles originated between Sogdiana and the western regions of China. However, only after the Islamization of Central Asia in the 8th century did these weavings evolve into new structures, and floral motifs were widely used to embellish or substitute the initial pearl medallions. By examining a group of 8th-9th-century weavings, which have recently appeared on the art market, in this paper, I discuss differences and variations between early and later structures and iconographic motifs. I argue that the Sogdian and Turko-Mongol trade might have also occurred beyond the main Silk Routes across the Qinghai-Tibetan plateau. In Sichuan and the ancient Bactria (between the Hindukush and the Oxus River), original Sogdian compositions might have been acquired and transformed to suit the early Tibetan (Tubo) empire. This paper presents the first results of a new project titled Across the Tuyuhun-Tubo Kingdom: Visualizing Material Culture from Dunhuang to Sichuan between the 6thand 9th centuries, which was recently awarded the Henry Luce Foundation/ACLS Program in China Studies Early Career Fellowship 21-22.

Gasparini is Assistant Professor of Chinese Art and Architectural History.